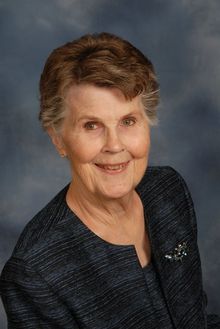 Anita Faye Carson was born on October 25, 1936, near Woodbine, Iowa to Leonard and Lila (Towne) Walker. She attended country school and graduated from Woodbine High School in 1955. She then attended Wayne State College for one semester before starting work at Northern Natural Gas. On September 16, 1956, Anita married LaVerne Carson at the First Christian Church in Woodbine. In 1964, Anita became the secretary at the College of Business at UNO. She retired in 1989. The couple moved to Little Rock, Arkansas and returned to the Omaha area in 2003.

Anita was a member of the St. James United Methodist Church in Bellevue, Nebraska and DAR. She enjoyed working on genealogy, attending the Walk to Emmaus, and playing bridge. She also attended the College World Series games for over 35 years and she was an avid Husker volleyball fan.

Anita died on Thursday, January 15, 2015, at the Fort Walton Beach Medical Center in Florida at the age of 78 years, two months, and 21 days.

Anita was preceded in death by her parents; sister, Lucille Dynek; and a grandson, Jonathan Sneed. She is survived by her husband of 58 years, LaVerne Carson of Papillion, Nebraska; three daughters, Kathy and her husband Lee Sneed of Wheaton, Illinois, Sue Carson of Omaha, Nebraska and Jane and her husband Kevin Wynn of Papillion, Nebraska; three grandchildren, Elizabeth and her husband Evan Rotert, Zachary Wynn and fiancée, Laura Hanneman and Sara Wynn; brother, John Walker and his wife Cindy of Austin, Texas; special aunt, Irma Williams; of Woodbine, Iowa; and many other relatives and friends.

To order memorial trees or send flowers to the family in memory of Anita (Walker) Carson, please visit our flower store.