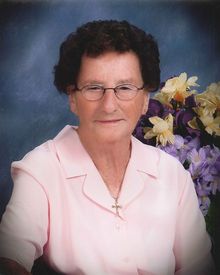 Annie Rea (Park) Hardy Mills was born on November 12, 1918, in Ireland to Agnes Park. Annie and her mother came to the United States when she was three years old on the White Starline Ship. They settled in the Dunlap and Woodbine area where Annie's mother was a housekeeper for her Uncle Tom Park. Annie went to country school and then Dunlap Public School. Annie's mother married Bill Stump. Annie worked for area families in the area. On November 21, 1936, Annie married Harold Hardy at the Congregational Church in Dunlap. The couple farmed in the Dunlap area and later moved into Woodbine and settled on C Street. Annie worked at Rose Vista Nursing Home in Woodbine for 20 years in the housekeeping department. Harold died on May 7, 1985. Annie married Orville Mills in 1989 and he died in 1992.

Annie was a member of the Christian Church in Woodbine. She enjoyed working on the farm with Harold. She also enjoyed taking care of her house and yard as long as she was able.

To order memorial trees or send flowers to the family in memory of Annie (Hardy) Mills, please visit our flower store.