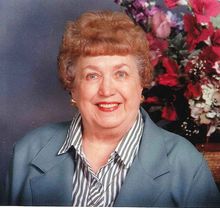 Arlene Ann (Feser) Michel was born to Anton and Elizabeth (Dresen) Feser near Defiance, Iowa. She was baptized and confirmed at St. Peter's Catholic Church in Defiance. She attended country school and graduated from St. Paul High School in Defiance. Arlene married Gary Michel on December 15, 1967, in Omaha, Nebraska. Arlene worked at the Rose Vista Nursing Home in Woodbine, Iowa for 13 years as a head cook.

Arlene was a member of Sacred Heart Catholic Church in Woodbine. She enjoyed traveling to many places including: Las Vegas, Colorado, Mt. Rushmore, and Louisiana. She also enjoyed watching the Iowa Hawkeyes and working on latch hook projects. Arlene always had a large garden. Most of all, Arlene loved her family.

To order memorial trees or send flowers to the family in memory of Arlene Michel, please visit our flower store.