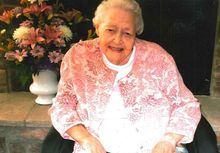 Bertha Lucille (Shipman) Corwin was born March 13, 1923, to Guy and Louvenia (Rogers) Shipman in Woodbine, Iowa. She attended country school and Woodbine High School; graduating in 1941. After her graduation, Bertha enlisted in the armed forces and was stationed at Fort Kearney, Nebraska working on B17 bomber instrument panels. She enjoyed her time in the service and talked of her experiences throughout the years. She said she wanted to know about all of the parts of the planes, so she rode in different parts of the plane including the baggage area. A highlight was when one of the B17s flew into Council Bluffs. Her daughter, Peggy and her husband Jim Slagle, took her to see the plane. She also got to visit with the pilot. They reminisced about Bertha's years in the service. After the war ended in 1945, Bertha returned to Woodbine and married the love of her life, Donald C. Corwin. He too had just returned after serving in the armed forces. The couple purchased their home in Woodbine soon after they were married. Don was killed in a trucking accident on April 10, 1959. Bertha lived in her home until she moved to Rose Vista in May of 2008.

Bertha was a stay at home mom and did the book work for Don's custom grinding business. After Don's death, she remained in their home and raised their three children. Later she worked at Rose Vista as a nurse's aide. She then ran a day care from her home and was known as "Grandma" to many. Bertha enjoyed summer visits with her grandchildren and puttering in her yard. She loved flowers of all kinds and took great pride in keeping her yard and flower gardens looking nice. She always "saved" the summer flowers by bringing them in the house in the fall and lined her windows and porches with the flowers. Bertha loved to go on the shopping trips and out to eat while she was a resident at Rose Vista.

Bertha died on Thursday, July 13, 2017, at the Rose Vista Nursing Home at the age of 94 years and four months.

To order memorial trees or send flowers to the family in memory of Bertha Corwin, please visit our flower store.