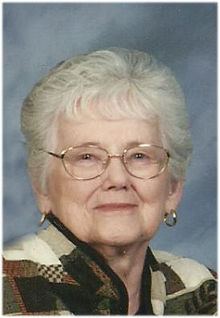 Bette Jean (Anderson) Harris was born on December 3, 1930, to Lars and Florence (Clemon) Anderson in Ute, Iowa. She lived with her family on a farm near Ute until she was six years old. The family then moved to Dunlap and lived there until 1947 when they moved to Woodbine. Bette graduated from Woodbine High School in 1948. She began working at the phone company, and on June 10, 1951, Bette married Bill Harris at the Methodist Church in Woodbine. The couple lived in Colorado Springs, Colorado for two months and then in Anchorage, Alaska. They returned to Woodbine following Bill's honorable discharge from the Army. Bette returned to work at the phone company.

Bette was baptized and confirmed at the Soldier Lutheran Church. She was a member of St. John Lutheran Church in Dunlap as an adult and was active in WELCA. Bill and Bette were also active in AFS International. Bette enjoyed reading and traveling. The couple volunteered on various mission trips through Mission Builders of the Lutheran Church. They have traveled to all 50 states as well as all but one Canadian province and have made three trips to Europe to visit their exchange students.

Bette was preceded in death by her parents; sister, Verla Olson; two brothers, Donald (Andy) Anderson, and Loren Anderson; She is survived by her husband, Bill Harris originally from Woodbine now living in Papillion, NE; daughters, Ann and her husband Dave Ayer and their daughters, Angie and Ryan Goebel, Brita DeLaet and Rachel Ayer of New Ulm, MN; daughter Jean and her husband Leonard Stohlmann of Manley, NE and their daughters, Sarah of Omaha, Emily of St. Paul, MN, and Christine and Jesse Roberts of Lincoln, NE; two exchange students, Paula and husband Kustaa Poutiainen of Helsinki, Finland and Christophe and wife Fredrika Massot of Paris, France; sister, Doris and husband Phil Houston of Plano, TX; sister-in-law Doris Anderson of Omaha, NE; and many nieces, nephews, friends and relatives.

To order memorial trees or send flowers to the family in memory of Bette Harris, please visit our flower store.