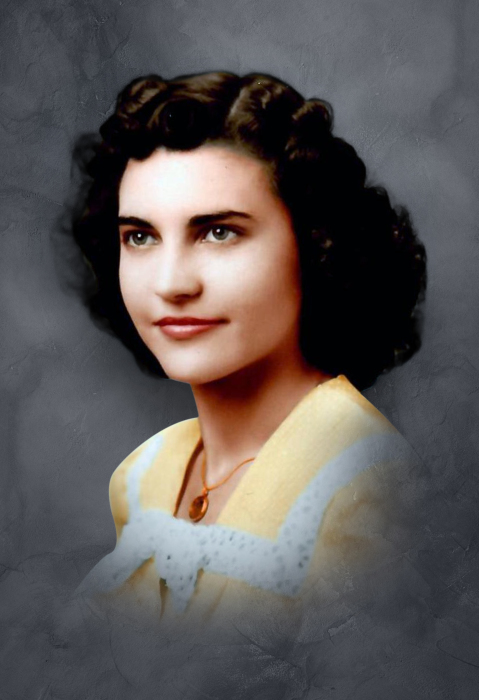 Beulah Mae (Sandoz) Lowrey was born on January 16, 1924 in Verdigre, Nebraska. Her parents were Emil E. “Sam” Sandoz and Libbie (Schreier) Sandoz. In addition to their usual work and parenting, Sam was an avid photographer and Libbie was an accomplished pianist and had a knack for baking pies and Czech kolache.

Along with her sister, Ione, Bee was a member of the “Greatest Generation” that grew up in the Depression and won World War II. She had a fun childhood with short trips to the Black Hills in South Dakota and going with her parents to watch manage the Verdigre Baseball Team versus other town teams. Bee also enjoyed riding the train to Norfolk with her maternal grandmother to shop and go to the movies with her at the Empress, the Verdigre movie theater. Her favorite actress was Shirley Temple.

Bee was popular in high school and participated actively in sports and was a cheerleader. She often talked about the big football games between Verdigre and their rivals in Niobrara and Creighton. She was also an active member of the Methodist Church and youth activities.It was fun going to Nadine’s soda shop with friends for a coca cola after school.

After graduation from Verdigre High School, Bee took a long trip from Columbus, Nebraska to Los Angeles to visit her sister. During that trip, Bee stayed with family friends in Beverly Hills and visited all the sights including Griffith Park.

Returning from the trip, Bee started her business career at Stockyards National Bank in South Omaha. In 1946, she met a handsome customer who had returned from World War II as a Lieutenant. She soon noticed that he came purposefully to her window and he finally asked her for a date. Jerome Lowrey would walk to the train in Woodbine, Iowa and come down for dinner and dancing. He would soon propose and on Valentine’s Day, 1947, they were married at the 1st Presbyterian Church. After their wedding they took a trip to the eastern coastal states. Courtesy of Jerome’s brother, Colonel Austin Lowrey, Jr who was eye doctor to President Truman, they would drive right up to the White House and go to the Oval Office and sit in the President’s chair! As Jerome would say, “This was the only time Bee didn’t have her camera!”

The couple would have two children: a son, Jay, and a daughter, Valerie.

In 1951, they opened Lowrey Oldsmobile which was a fixture on Main Street in Woodbine until 1978.

Life in small town America during this period was about building a business, parenting, having fun with the family and hosting her sister’s family.  Bee especially loved the Christmas Season: the services, the decorations, and the baking treats. In 1962, Bee’s parents retired and built a house in Woodbine. In 1964, Jerome bought a small acreage where they spent time raising livestock and having picnics in the autumn. The same year, a new home at 37 10th Street was completed. During this time, Bee worked as a Cashier for the First National Bank. Later she worked at Eby Drug. She was also active in the community as a member of the 1st Presbyterian Church, P.E.O, American Legion (over 70 years membership!) and Eastern Star organizations.

In 1965 Lauritz Godoy from Molde’, Norway joined the family, as an exchange student, to finish high school. He has remained Bee’s “son” since leaving Woodbine always staying in touch and close to her heart.

In 1976 and 1978, Bee became a grandmother to Jason and Erin. The children would become a regularly visit in the summer in Woodbine with fun times of short trips to hunt    antiques, the 4th of July in Logan and having picnics.

After Jerome’s retirement in 1987, they moved to Omaha. After Jerome’s passing in 1999, she continued to live at their home until moving to a retirement village. In 2012, she would return to Verdigre for the Alumni Banquet to celebrate her 70th high school graduation anniversary. In 2017, she would move to Brookestone Meadows in Elkhorn until she passed away on November 22, 2019 surrounded by her children.

She is survived by her children and spouses, Val and Don Doherty of Evergreen Park, Illinois; Jay and Diana Lowrey of Las Vegas, Nevada; her grandchildren, Jason and Ashley Fecht of Las Vegas, Nevada and Erin Lowrey of Los Angeles, California. Lauritz still lives in Molde’, Norway with his wife and their children. She leaves behind many nieces, nephews and friends.

~Memorials may be directed to the P.E.O. Foundation, the Wounded Warrior Project, or the Harrison County Humane Society~

To order memorial trees or send flowers to the family in memory of Beulah "Bee" Lowrey, please visit our flower store.