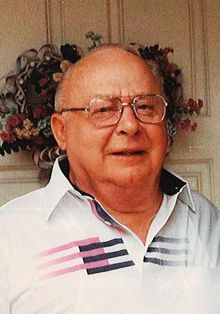 William Levi Martin was born January 17, 1925, in Pisgah, Iowa, to Edward and Maria (Butts) Martin. Bill was raised in Pisgah and attended Pisgah High School. Bill married his high school sweetheart, Bonnie Nuzum, on June 17, 1944. They farmed in the Pisgah area for a number of years and Bill was also a carpenter. The couple moved to Council Bluffs, Iowa. Bill continued to do carpentry work until he was in his 70s. Bonnie died on July 8, 2015.

Bill enjoyed golfing and loved to take care of their yard and garden. He also enjoyed talking about politics and the history of the United States.

To order memorial trees or send flowers to the family in memory of Bill Martin, please visit our flower store.