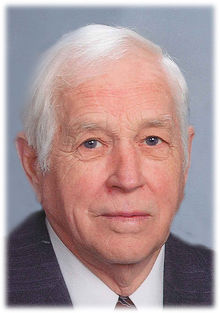 Robert Ross Gochenour was born September 18, 1933, to Ross and Wilma (Wallis) Gochenour in Calhoun Township. He was raised in the Calhoun area and attended country school and Magnolia High School. Bob married Julia "Judy" Alton on May 21, 1955, at the Missouri Valley Church of Christ. The couple farmed their entire life in Harrison and Monona counties. Before the couple was married Bob helped construct the Magnolia gym, worked for the USDA bin storage in Mondamin and the Missouri Valley River Flood Control. After Bob and Judy were married he worked at the packing plant, Union Pacific Railroad, Logan Purina Feed Mill and did some dozer work.

Bob was an active member of the Logan Christian Church and served on the church board. He enjoyed giving communion to the Westmont residents and Logan shut-ins. He was a member of the Magnolia Promenader and Circle 8 Square Dance Club. He enjoyed mushroom hunting, horseback riding, playing cards, gardening, fishing, and woodworking. He loved spending time with his family and particularly enjoyed following his children's and grandchildren's activities in 4-H and school. He also enjoyed traveling, boating, having coffee at the coffee shops in Magnolia and Pisgah, and watching FOX, RFDTV, and classic movies. He looked forward to church revivals, listening to men's gospel quartets, family reunions and working at the church. In his younger years the neighbors would work together for field and hay work. With his John Deere 4520, he did dirt work and tree piling. He also enjoyed buying livestock at the sale barn, attending the county and state fairs. Bob planted seeds of many types for this world and the life beyond.

To order memorial trees or send flowers to the family in memory of Bob Gochenour, please visit our flower store.