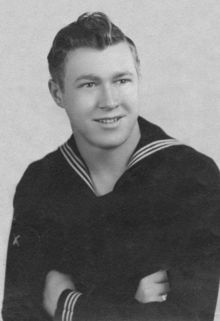 Robert Joseph Nauroth was born July 1, 1927, in Dunlap, Iowa to William and Theresa Ann (Feser) Nauroth. He was raised near Dunlap and attended St. Joseph Catholic School in Dunlap. Bob joined the U.S. Navy and proudly served his country during World War II. After his honorable discharge Bob worked for Burlington Northern Railroad. He moved to Chicago and worked in a service station and then returned to Dunlap to work for Gorham Motors. On July 11, 1954, Bob married Beverly Fitch. Bob worked for Ruth Boe at Ryder & Co. in Dunlap and Union Gas & Skelgas working his way up to managing the Skelgas business.

Bob was a member of St. Patrick's Catholic Church and the Dunlap American Legion. He enjoyed golfing, playing cards, hunting and fishing. He also enjoyed bowling on a league.

Bob died Friday, January 13, 2017, at the Community Memorial Hospital in Missouri Valley at the age of 89 years, six months and 12 days.

To order memorial trees or send flowers to the family in memory of Bob Nauroth, please visit our flower store.