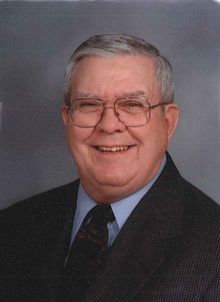 Bernard "Bump" Leonard Assmann was born March 24, 1934, in Dunlap, Iowa to Joseph and Deloris (Egan) Assmann. He was raised in the Dunlap area and attended St. Joseph Catholic School graduating in 1952. Bump worked for Union Pacific Railroad for three years. Bump proudly served his country in the United States Army. While in the service, Bump married Lorrene "Rene" Kloewer on June 22, 1957. After his honorable discharge, they returned to Dunlap. The couple farmed east of Dunlap until their retirement in 1983. He then worked at Union Gas as a delivery trucker, bartended at the Gold Slipper and the golf course and worked for the Dunlap CO-OP. They moved into Dunlap in 1993. Rene died on February 20, 2016.

Bump was a member of St Patrick's Catholic Church and was a 1st Degree Knights of Columbus. He enjoyed playing euchre and rummy. Bump has been a lifelong Cubs fan, but most importantly he loved spending time with his family. He enjoyed teaching his grandchildren how to sing Bill Crogan's Goat. Additionally, he enjoyed gardening and going to the casino.

Bump died on Sunday, July 30, 2017, at the Hillcrest Rehab Cottage in Papillion, Nebraska at the age of 83 years, four months and six days.

To order memorial trees or send flowers to the family in memory of Bump Assmann, please visit our flower store.