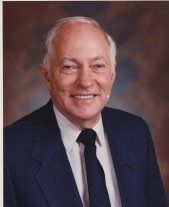 Carl Ray Woods was born March 23, 1927, to John and Victoria (Shelton) Woods in Ava, Missouri. Carl's father was killed in an accident in Northsburo, Missouri when Carl was three years old. His mother married Frank Landon and the family moved to Cumberland, Iowa when Carl was five. The family later moved to Wiota, Iowa and Carl graduated from Atlantic High School in 1944. Carl joined the Merchant Marines and proudly served his country for four years in the South Pacific during WWII. He was honorably discharged in 1948. He returned to Atlantic, Iowa and was working when he got drafted into the Army. He again served his country for another two years during the Korean Conflict where he was stateside, but he served as a medic. After this honorable discharge he returned to Omaha and worked at Veteran's Hospital. Carl married Dorothy Ann Leonard on December 17, 1955, at a United Methodist Church in Lincoln, Nebraska. The couple lived in Omaha until 1958 and then they moved to Council Bluffs. Carl started working for Builder's Supply in 1956 and he worked there for 38 years retiring in 1993. In 2012, the couple moved to the Harmony Court in Bellevue, Nebraska.

Carl was a member of the Trinity Cathedral. He loved to travel with Dorothy in their RV. He was also an avid Hawkeye fan and used to have season tickets for the football games. Carl also enjoyed reading. The family loved to camp while the boys were growing up and in his retirement he enjoyed doing yard work.

Carl was preceded in death by his parents; stepfather; and sister and brother-in-law, Marjorie and Duane Hughes. He is survived by his wife, Dorothy Woods of Bellevue, NE; two sons, Russell (Lori) Woods of Omaha, NE, David Woods of Everett, WA; three grandchildren, Lisa, Kelley and John; special auntie, Irm; and many other relatives and friends.

To order memorial trees or send flowers to the family in memory of Carl Woods, please visit our flower store.