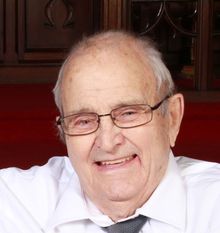 Charles Jess Benjamin was born May 30, 1927, to H. L. "Dick" and Blanche (Kelley) Benjamin near Dunlap, Iowa. He attended the Picayune Country School and Dunlap Public School. Charlie proudly served his country in the U.S. Army from 1946-1949 in Germany and as a staff sergeant in Korea until his honorable discharge in 1951. Charlie was awarded two Bronze Stars. He returned to farming in the Dunlap area and farmed with his brother-in-law, Clyde Crandall. He also lived in California for several years and worked at a golf course. Charlie married Glenda Smith on February 6, 1963, in Las Vegas. Charlie and his brother, John, owned and operated the Larson Truck Stop & Café. He then took a job at the Woodbine Coop gas station. In 1975 he purchased the Woodbine Locker and in 1986 he purchased the Dunlap Locker retiring in 2008.

Charlie was a member of the American Legion and VFW. He enjoyed horseback riding, caring for animals, playing cards, and mushroom hunting.

Charlie died Wednesday, July 15, 2015, at the Crawford County Memorial Hospital in Denison, Iowa at the age of 88 years, one month, and 15 days.

Charlie was preceded in death by his parents, daughter, Greta and her husband Lynn Smith, two grandchildren, Alex and Alexis; and five siblings, Robert, George and John Benjamin, Ethel Crandall and Ruby Milks. He is survived by his wife, Glenda of Dunlap; four children, Gay (Clarion) Melby and Gina (Ed) Green all of Dow City, Mary (Kevin) Boger of Denison and Don (Sonja) Benjamin of Dow City; 15 grandchildren; 17 great grandchildren; sister, Nora Van Cleave of Omaha, Nebraska; "adopted son" Ken Jacob and his family of Ames, Iowa; special friend his dog, Sadie; and many other relatives and friends.

To order memorial trees or send flowers to the family in memory of Charlie Benjamin, please visit our flower store.