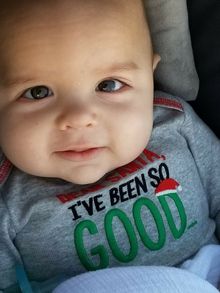 Cole Edward Clark was born on July 10, 2017, to Eric and Shawna (Lamberson) Clark in Omaha, Nebraska. Cole loved to play peek-a-boo with his blanket, laugh at his brother Korbin, jump in his jumper and fight over the toys with his twin sister Hailee. Cole had his dad's laugh and his mother's attitude. Cole would always flash his smile for you.

Cole was preceded in death by two great grandfathers, Donald Petersen and Walter F. Mason. He is survived by his parents, Eric and Shawna Clark; brother, Korbin Clark; twin sister, Hailee Clark; grandparents, Kim Clark and Gail and Kristina Lamberson all of Logan, Iowa; great grandparents, Carol Petersen, Charles and Darlene Lamberson all of Logan and Ione Mason of Missouri Valley, Iowa; two uncles, Brandon Clark and his wife Kylie and Cody Lamberson and his fiancée Jonna Andersen all of Logan, Iowa; and other cousins, relatives and friends.

To order memorial trees or send flowers to the family in memory of Cole Clark, please visit our flower store.