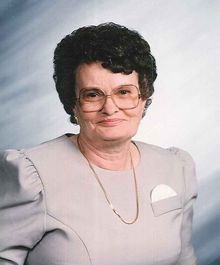 Darlene Ferne (Nuzum) Moore was born on July 8, 1934, to Howard and Beatrice (Coate) Nuzum near Pisgah, Iowa. She attended Preparation Country School, Pisgah Public School, and she graduated from 8th grade from Ute Junior High. Darlene detasseled corn and worked at a Dairy Sweet in Carroll, Iowa. She also lived with the Thoreson family to help with the housekeeping and children. Darlene married Wilbur Moore September 19, 1953, at the Christian Church parsonage in Logan, Iowa by Rev. Evans. The couple farmed near Moorhead. Darlene raised chickens, collected eggs and milked cows. She also had a large garden.

Darlene died at the Methodist Medical Center in Omaha on July 13, 2016, at the age of 82 years and five days.

To order memorial trees or send flowers to the family in memory of Darlene Moore, please visit our flower store.