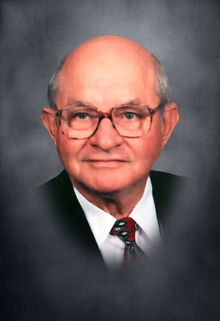 Darrell LaVerne Argotsinger was born December 16, 1923, to Glenn and Viola (McIntosh) Argotsinger in Dow City, Iowa. He was raised near Dow City and graduated from Dow City High School. After his graduation he farmed with his dad. Darrell met his future wife, Mary Young, at church and on August 27, 1944, the two were married at the Woodbine Reorganized Church of Jesus Christ of Latter Day Saints. Darrell worked as a lineman until he was electrocuted in 1949. He then went to work for International Moline Tractor in Woodbine and Dow Ford in Logan. Darrell was elected the Harrison County Clerk and did this for many years. After leaving county government he worked for IDS Financial Planning in Omaha. He was elected county clerk again and worked there until his retirement. Of all of the positions that Darrell held, the one most dear to him was being the pastor at the Woodbine and Logan RLDS Churches. Darrell was a Patriarch Evangelist in the church. Mary died on April 10, 2016, after 72 years of marriage.

To order memorial trees or send flowers to the family in memory of Darrell Argotsinger, please visit our flower store.