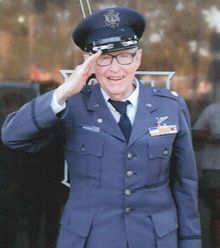 Richard "Dick" Eaton Randall was born on August 11, 1923, in Marshalltown, Iowa. He was the oldest son of James Luther and Leola (Silence) Randall. He was raised on the farm and graduated from Ferguson High School in 1939 at the age of 16. Dick honorably served his country, becoming a bombardier and celestial navigator during WWII. He also served during the Korean War and then stayed in the Air Force Reserves, flying cargo planes during the Vietnam War. He served for a total of 26 ½ years in the military; achieving the rank of Lieutenant Colonel. On August 18, 1946, Dick married Margaret Martin at the Bangor Friends Church in Bangor, Iowa. The couple was blessed with five children. Dick worked in a bank for over 70 years. He started as a bookkeeper/teller, then loan officer, ultimately becoming the president of the Dunlap Savings Bank, now the Community Bank, when the Randall family moved to Dunlap in 1961.

Dick was a devout Christian and a long time active member of the Dunlap United Methodist Church. Dick's entire life was about living in grateful appreciation to God Our Savior. Dick loved singing in the church choir. He was recently a member of the "Goldenaires", a group of retired people who sing for area nursing home residents. Dick was very community-minded and loved giving back to the community. He was instrumental in getting a nursing home in Dunlap, and a loyal supporter of area schools, arts, sports, and music. He was active in the political process. He served on the School Board, 4-County Fair Board and was the treasurer for the Iowa Bankers Association. Both Dick and Margaret received Ak-Sar-Ben's Good Neighbor Award for their love of their community. Dick and Margaret's love of people extended beyond the immediate community as they hosted two foreign exchange students and welcomed many visitors from other countries through their involvement with "The Friendship Force." They were married for 35 years at the time of Margaret's death in 1982. Dick married Katie (Botos) Gamble on March 9, 1984, and they were married for 30 years at the time of Katie's death in 2014. Dick was a loving husband, father, grandfather and great grandfather. He was a beloved child of God and a sinner saved by grace.

To order memorial trees or send flowers to the family in memory of Dick Randall, please visit our flower store.