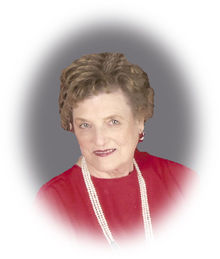 Donna June (Copp) Gochenour was born to Roy and Pearl (Peterson) Copp on June 3, 1928, at their farm six miles east of Logan. Donna attended Starry Point Country School through eighth grade then Logan High School graduating in 1945. She taught country school in Harrison County for two years after her high school graduation. On November 2, 1947, Donna married Francis Gochenour – a marriage lasting until his death in 1997. Donna was a homemaker when her children were small but later worked as librarian at the Logan Public Library for eight years and an aide at Horton Nursing Home for two years.

Donna enjoyed membership in Delvers Study Club, Daughters of the American Revolution, and Iowa Retired Teachers Association. She was an active member of the Logan Christian Church for over fifty years teaching Sunday school, Vacation Bible School and Junior Church when her children were still at home. One of Donna's favorite past times was researching her family genealogy. She was also a loyal Iowa Hawkeye fan for eighty years. Her interest started in the 1930's when she listened to the Hawkeye football team on the radio with her father. She didn't want to be disturbed when the Iowa football and basketball games were in play and would not answer the phone or door until the games were over. Another favorite activity was taking cruises. She took several over her retirement years to Alaska, Mexico, the Caribbean and through the Panama Canal.

Donna died on Monday, September 12, 2016, at Hilltop Estates in Gothenburg, Nebraska at the age of 88 years, three months, and nine days.

To order memorial trees or send flowers to the family in memory of Donna Gochenour, please visit our flower store.