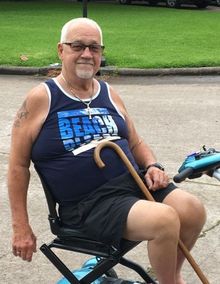 Donald Harold Clark was born August 28, 1943, to Ted and Ada Belle (Pitt) Clark in Logan, Iowa. He was raised in Logan and attended school in Logan. On February 26, 1966, Donnie married Sharon Kastrup at the First Lutheran Church in Blair, Nebraska. The couple made their home in Logan. Donnie held several jobs including: mail carrier, electrician for George Sears, worked at Campbell's Soup Company, was a Logan police officer, painted and roofed, worked at Baker's grocery store in Omaha, and owned Clark's Café in Logan. Donnie then went to Pro Arts Barber College in Omaha and owned and operated the Family Hair Center in Logan for many years.

Donnie was a volunteer with the Logan Fire Department. He loved to visit, pull pranks, and go downtown for coffee. He also enjoyed Thanksgiving, Iowa Hawkeye football, eating at Red Lobster, and traveling to Hawaii.

Donnie died Thursday, September 29, 2016, at the Community Memorial Hospital in Missouri Valley, Iowa at the age of 73 years, one month, and one day.

To order memorial trees or send flowers to the family in memory of Donnie Clark, please visit our flower store.