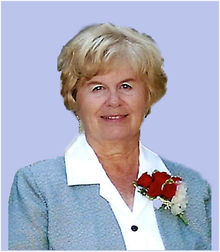 Doris Gayle (Moore) Hildreth was born April 2, 1941, to Lewis and Aleta (Jensen) Moore in Onawa, Iowa. She was raised in Moorhead and graduated from Moorhead High School in 1959. Doris married Bernard Hildreth on May 15, 1959, in Council Bluffs, Iowa. They lived in Council Bluffs for one and one half years before moving to a farm near Pisgah, Iowa. Doris worked as the manager for the Job Service of Iowa in Missouri Valley until her retirement in 2007.

Doris was a member of the Community of Christ. She volunteered at the Harrison County Food Pantry for many years. She also enjoyed gardening, sewing, cooking and reading. Doris and Bernard loved to dance. Most importantly Doris' life revolved around her children and grandchildren. Doris was happiest when her household was full of family and friends.

Doris died on Friday, September 26, 2014, at the Buena Vista Regional Medical Center in Storm Lake, Iowa at the age of 73 years, seven months, and 24 days.

Doris was preceded in death by her parents and son-in-law, Terry Carritt. She is survived by her husband, Bernard Hildreth of Pisgah, Iowa; five children, Terry (Julie) Hildreth of Omaha, Nebraska, Rhonda (Kevin) Johnson of Moorhead, Iowa, Rebecca Rau and Robert (Lora) Hildreth all of Council Bluffs, Iowa, and Shelly (Elliott) Ham of Lampasas, Texas; 16 grandchildren; one great grandson; three siblings, Ardis Moore of Woodbine, Iowa, Monte (Gretchen) Moore of Warsaw, Indiana, Trudy Pogue of Kearney, Nebraska; and many other relatives and friends.

To order memorial trees or send flowers to the family in memory of Doris Hildreth, please visit our flower store.