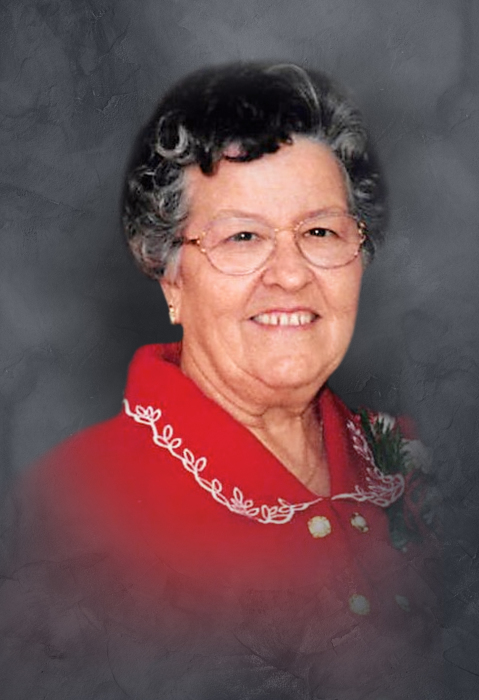 Doris Neva (Outhouse) Mann was born April 4, 1933, to Leslie David and Gladys Musetta (Nuzum) Outhouse in Soldier, Iowa. She joined three older sisters on their family farm in Soldier. Later a younger brother joined their family. Doris attended grade school in Magnolia and Moorhead and graduated from Pisgah High School in 1951. After graduation, she worked in Sioux City, Iowa, and began dating Loren Conley Mann from Pisgah. On December 22, 1951, she married Loren at the RLDS Church in Moorhead, Iowa. The couple farmed for several years in Soldier before they purchased and moved to their 80-acre farm near Woodbine.

Doris was a devoted wife and mother and worked extremely hard raising their seven children. She earned her Licensed Practice Nursing (LPN) degree from Iowa Western Community College in 1968. Doris worked for several years at Rose Vista Manor and Longview Nursing Home before joining Harrison County Home Health from 1975-1995. While there she served as a Home Health Aide and later as Supervisor of Home Health.

In retirement, Doris enjoyed gardening, baking, and knitting or crocheting baby blankets. She created newborn baby hats for the CHI Kearney Hospital in Nebraska. She was an expert embroiderer, creating tablecloths and tea towels for all her children and grandchildren. Doris was known for her homemade beef and noodles, peanut brittle, apple crisp, cookies and fruit pies that were always in the freezer ready for guests. One of her favorite hobbies was selecting ceramic figurines that she gave to each grandchild during their school years. She was also an avid reader, able to devour a book in one or two days.

Doris was a lifelong member of the Community of Christ church and supported the church’s charity, Outreach International, throughout her life. Outreach International serves the poor and struggling families in developing countries throughout the world. During her life, Doris lived out her faith through devotion to prayer, especially for her family, extended family, and those in need. In her final days, she would speak of praying over her children, grandchildren, great-grandchildren and all the children in the nation. Her children and extended family deeply cherish her legacy of love, service and faithfulness to others.

To order memorial trees or send flowers to the family in memory of Doris Mann, please visit our flower store.