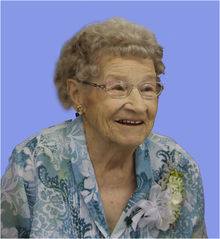 Doris Byrle (Crabb) Woodward was born September 5, 1924, to Floyd and Ada (Coffman) Crabb at their home in Little Sioux, Iowa. Doris and her twin sister, Deloris, were the youngest children in this family. Doris graduated from the Little Sioux High School in 1942. Bonnie (Nuzum) Martin and Doris stayed with Doris' cousin, Mike Powell, in Missouri Valley to attend Northern Iowa Extension University. They both earned teaching certificates in three months. This certificate was good for two years so Doris taught at the Smith Lake Country School from 1943~1945. Doris then was busy raising her family. From 1983~2012 she cleaned the Pisgah Bank. She also cleaned the City Hall until December of 2013. Doris married William Lewis Woodward on August 17, 1944, at the Stone Church in Independence, Missouri by Brother Tickameyer. Witnesses were Ted and Bernice Pace (Bill's sister and brother-in-law.)

Doris was a faithful member of the RLDS Church, now known as Community of Christ. She was a Sunday school teacher for over 30 years, taught Vacation Bible School, and was a leader for the Skylark girls of the church. Doris was very involved with the Ladies Aide as well. She served as the secretary until August 2014. Doris would always make a decorated angel food cake for each family member's birthday.

To order memorial trees or send flowers to the family in memory of Doris Woodward, please visit our flower store.