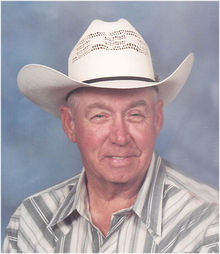 Edward Carl Shumate was born December 7, 1937, to Walter and Maymie (Kline) Shumate near Dunlap, Iowa. He was raised near Dow City and attended country school then Dow City Public School. Ed started farming with his father. In his late teens he moved to California and worked for a farmer there for a short time. He returned to the Dunlap and Dow City areas and resumed farming. On June 3, 1959, Ed married Peggy Ann Whited at the Baptist Church in Denison. Ed continued to farm. They also operated the Corner Bar from 1969~1972. He also was the hail adjustor for Combine Insurance. Ed started working for Farmland in 1973. He also continued to farm.

Ed was a member of St. John Lutheran Church. He was baptized with his grandson, Travis. Ed loved horse races, fishing, and bowling. In the last number of years he particularly enjoyed watching birds ~ especially hummingbirds. Ed loved his grandchildren unconditionally. He enjoyed going to all of his kids and grandkids events as well. When his boys were younger, Ed coached Legion Baseball. He enjoyed having weenie roasts in the timber with a big bon fire. Ed also enjoyed traveling ~ especially to Las Vegas. He was also a great card player.

To order memorial trees or send flowers to the family in memory of Ed Shumate, please visit our flower store.