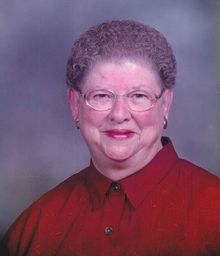 Ellie Ruth (Arthur) Murphy was born May 19, 1934, to Ambrose and Ida Mae (Jarrett) Arthur in Flintstone, Georgia. Ellie's parents died before she was 11 years old so her brother, Charlie, raised her. Charlie served over 30 years in the U.S. Army. While they were stationed in Fort Mammoth, New Jersey, Ellie met Gene Murphy. One week after Ellie's 18th birthday, the couple married. Following Gene's honorable discharge from the Army, the couple moved to Dunlap and lived on the Murphy family farm. Ellie was given one driving lesson and she steered the car into a fence. She never got behind the wheel again. The couple moved to Council Bluffs and started their family with three boys. The family then moved to Southern California and three more boys arrived. While in California, Ellie worked at the Mattel Toy Factory installing the voice box in the Chatty Cathy dolls. The family moved to Atlanta, Georgia for a winter and then to Ralston, Nebraska. Three daughters made their arrival once they moved to Nebraska. Ellie worked at the Crown Products factory that was close to their home. She lost the tip of her thumb in a work related accident and received a small settlement. The family used this money to get their first telephone and each child got their own bed.

In 1976, the family moved to Dunlap and started their own business, Murphy's Tavern. Ellie was a bartender and short order cook. Ellie's hamburgers and soups were second to none. Ellie's slogan was "You will get it my way or not at all!" On occasion, she would have a featherbone feed which filled the bar. Hanging over the bar was a picture of the Sacred Heart. It was a reminder to all that the Lord was looking over us. Gene died in 1980. Ellie closed the bar in 1984 to spend time with family and friends. As Ellie's health began to fail; her daughter, Mary, and several home health care nurses kept her comfortable and in her home.

Ellie died on Sunday, September 24, 2017, at her home surrounded by her family at the age of 83 years, four months, and five days.

To order memorial trees or send flowers to the family in memory of Ellie Murphy, please visit our flower store.