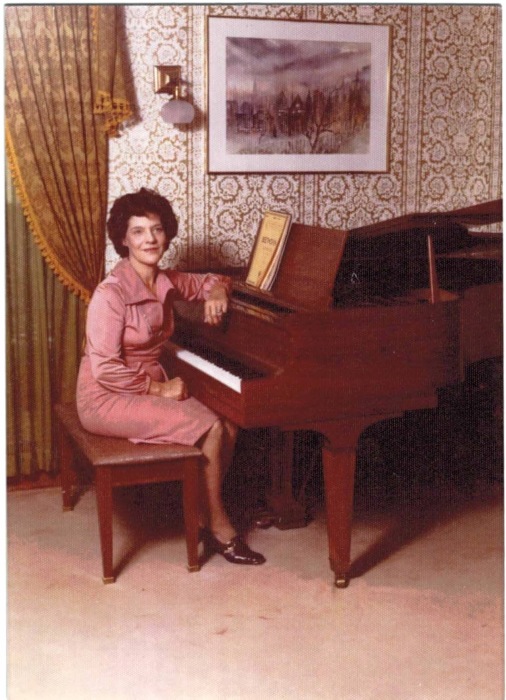 Evelyn Marie (Patrick) Eby was born on August 17, 1922, in Mapleton, Iowa to Joseph and Margaret (Graff) Patrick. Evelyn attended and graduated from Mapleton High School in 1940. She was on the high school diving team. Evelyn was best known for her talent as an alto saxophone player. She won the National Competition in Minneapolis, and received the highest rating of any participant. Her parents farmed and ran a dairy, where Pat worked with her two brothers and sisters. Later, the family ran Patrick’s Dairy Store in town. Evelyn said that she developed her strong-arm muscles from dipping ice cream. After high school, Pat attended and graduated from Wayne State College. She majored in music with an emphasis on voice and saxophone. Pat was famous for her soprano voice and beautiful vibrato. She sang for many weddings and funerals throughout her life. During the second half of her senior year, the band instructor in Ogalalla, Nebraska, was drafted to serve in World War II, and Pat was hired to finish the school year.

In 1944, she was hired to be the music teacher in Woodbine, Iowa. Again, this was during wartime. She was the teacher for the entire school, grade though senior-high. She taught vocal and instrumental music. Pat was so highly thought of as a teacher, that as her students came back for high school reunions, Pat was always invited to attend. She continued to give voice lessons to many young people in the community.

On June 10, 1946, Pat married Richard P. Eby, who had just returned from serving in WWII. Three children were born to this union: Mary, Robert and Stephen. Richard was the second-generation owner and pharmacist of Eby’s Drug Store. After teaching, Evelyn helped in the store and could be found dipping ice cream. Later on, Pat was in charge of the greeting card section in the store. Any child, adult or couple who were connected to Pat in any way would receive a birthday card every year. Pat would usually receive over 100 cards for her birthday.

Pat’s love of music was always an integral part of her life. She directed the Methodist Church Choir for many years, and then sang with the choir until entering the nursing home. She was the director and one of the driving forces behind Woodbine’s annual production of The Messiah, that was presented for many years. Along with her good friend Loie McElwain, Pat gave piano lessons to young people for many years. Her students often went on to have careers in music. She even gave lessons to three of her students after moving to Rose Vista. Pat was also an original member of the band, The Twinerville Tooters. She played saxophone and especially enjoyed playing with her friends.

Pat was a member of P.E.O. and served as president. She was also a 70-year member of the American Legion Auxiliary. Pat loved to present programs to the groups. Her programs were always full of information and very precise.

Pat was a lady with many talents and interests. She loved music, attending the opera with Margaret Cotton, and doing needlepoint and cross-stitch quilts. There are dozens of children in Woodbine who have received a cross-stitch quilt made by Pat. She loved nature, especially trees, birds and dogs, making angel food cakes from scratch for people and playing black jack at her favorite casino, The Four Queens in Las Vegas.

To order memorial trees or send flowers to the family in memory of Evelyn "Pat" Eby, please visit our flower store.