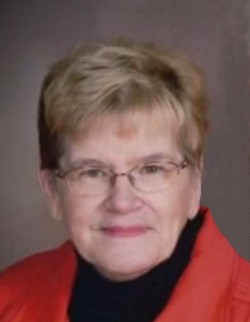 Evelyn “Peni” Francis Shaw, 82, of Carroll, formerly of Woodbine, Iowa passed away, Monday, October 31, 2022 surrounded by her loved ones at Regency Park in Carroll, Iowa.

She was born on October 4, 1940 in Fort Dodge and was raised by her Grandma Higby and Aunt Izelle.  Evelyn was nicknamed “Peni” by her Uncle Harry at an early age in reference to the song, “Pennies from Heaven.”  At the age of 10, she moved to Chicago, Illinois to live with her mother and stepfather.  At age 12, she returned to Fort Dodge to complete her education.  She began college and worked at the hospital until the first of her children were born.  When she met Donald Shaw, she found the love of her life and they were married in 1967; along with her daughters, Dawn Michelle and Deborah Leigh they soon added Daniel Kane, completing their family.

Peni worked in the insurance business in Woodbine, Iowa for 32 years and after brain surgery, decided to make her dream come true by opening a restaurant and catering company, Shaw’s Family Kitchen.  Don and Peni will always be remembered for their great joy of feeding others.  They were a team and cooking and fashioning creative menus to make dear ones happy was their love language.  She also enjoyed gardening, landscaping and caring for all of her beautiful flowers.  She loved to make every holiday special by decorating and designing elaborate menus to share with her family.  Peni’s ultimate pride and joy were her “sweet angels” as she called her grandchildren.

The family will host a private family memorial at a later date.

As a courtesy to the family, we are posting this on behalf of Roland Funeral Service of Atlantic, where a relative is funeral director.

Roland Funeral Service is caring for Peni’s family and the arrangements. Condolences may be left at www.rolandfuneralservice.com or sent to 1321 Salinger Avenue, Carroll IA, 51401.

Please click here to view the video tribute
To order memorial trees or send flowers to the family in memory of Evelyn "Peni" Shaw, please visit our flower store.