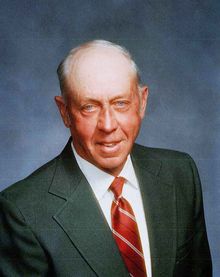 Franklin Eugene Roberts was born November 23, 1921, to Cyrus Eugene and Matilda (Lunau) Roberts in Dunlap, Iowa. Frank's mother died when he was five years old and his dad married Elizabeth Graves. Frank was raised near Dunlap and attended country schools and Dunlap High School. Frank farmed with his father until he entered the U.S. Army and proudly served his country for three years during WWII with the Engineer Battalion based in the Aleutian Islands for the majority of his time. After his honorable discharge he continued farming and trucking. On January 21, 1949, Frank married Eula Jeane Rannells at the Methodist parsonage in Dunlap. The couple farmed their entire lives. Frank took great pride in the farm place making sure everything looked its best. Farming and family were his life. With the wonderful care and love of his family and caretaker Julie Dobernecker, Frank was able to remain in his home environment.

Frank died on Tuesday, February 3, 2015, at Crawford County Memorial Hospital in Denison, Iowa at the age of 93 years, two months, and 11 days.

To order memorial trees or send flowers to the family in memory of Frank Roberts, please visit our flower store.