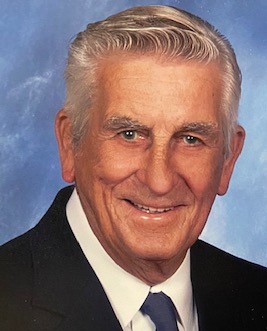 Geoffrey William Lake was born July 6, 1928, to Cyril and Ena Alice Lake in S.E. St. Pancras, London, England. Geoffrey attended school and he then worked at the Co-Op at Enfield Highway riding a three wheeler and doing deliveries. Geoffrey served in the British Royal Navy and was a pastry chef. Geoffrey married Eileen and the couple adopted one son, Michael. Eileen died in 1997. Geoffrey worked several jobs to provide for his family including: a driver for Fishers Transport in Waltham Abbey, Murex in Waltham Cross in the wire shop, he worked for a cleaning company, and then started  working for a  hauling business.

When Geoffrey was in junior high he had a pen pal by the name of Colleen Lee. They wrote letters to each other for years. Each of them ended up marrying their high school sweethearts. After Geoffrey and Colleen’s spouses died in 1997 and 1992, Geoffrey was determined to connect with Colleen again. He contacted the mayor of Soldier, Iowa who just happened to be Colleen’s cousin. Their romance bloomed and they started corresponding again. Geoffrey moved to Soldier in 1998 and they married in November of 1998. Following their wedding they were whisked off to New York City to appear on the Today Show and also 20/20 since their love story was so unique.

Geoffrey died on October 15, 2020, at the Dunlap Specialty Care at the age of 92 years, three months, and nine days.

Geoffrey was preceded in death by his parents; and first wife. He is survived by his wife, Colleen Lake of Dunlap, Iowa; son, Michael Lake of England; step-children, Donald Straight of Charleston, West Virginia, Denise Christiansen of Jefferson, Iowa and Dede (John) Sullivan of Dunlap; grandchildren; and many other relatives and friends.

THE FAMILY WILL BE HAVING A PRIVATE FAMILY SERVICE AT A LATER DATE.

To order memorial trees or send flowers to the family in memory of Geoffrey Lake, please visit our flower store.

A Time of Sharing and Singing