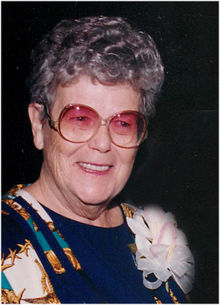 Georgia Ellen (Stilson) Koski was born April 5, 1919, to Albert and Rose (Jacobsen) Stilson in Dunlap, Iowa. She was raised in Dunlap and attended school. Georgia's father was a railroad man so the family moved many times. On April 18, 1936, Georgia married Ralph Koski at the Methodist Church's Parsonage in Dow City, Iowa. The couple owned and operated the Koski Insurance and Real Estate Agency.

Georgia was a member of the United Methodist Church in Dunlap, Rebekah Lodge, and the Booster Club where she was in charge of the bingo games for many years at the annual 4th of July celebrations. She was also a wonderful baker and made many wedding cakes. Georgia enjoyed playing games including: bingo and cards as well as making crafts and entertaining her friends. Ralph and Georgia both enjoyed dancing. In their retired years, they both enjoyed spending the winter months in Pharr, Texas.

To order memorial trees or send flowers to the family in memory of Georgia Koski, please visit our flower store.