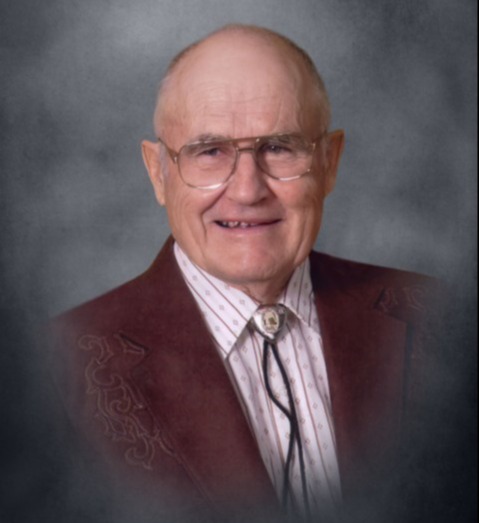 Gerald Henry Huebert was born on November 18, 1932, northwest of Portsmouth to Henry and Gertrude (Leinen) Huebert. He was baptized and confirmed at St. Mary Catholic Church in Panama and graduated from St. Mary’s Catholic School in 1951. Gerry was drafted into the Army and served from 1953 - 1955 during the Korean War. Gerry married Elizabeth “Betty” Hermeling on October 7, 1957 at St. Boniface Catholic Church in Westphalia. They farmed southwest of Panama and in March of 1965 moved to a farm northwest of Westphalia. In March of 1973, they moved to their present farm.

Gerry was a member of the St. Mary Our Lady of Fatima Catholic Church and of the Portsmouth American Legion Post #547. He had been active in the three communities he has lived in. While in Portsmouth he sang in the choir, has been on the parish council and as a CCD teacher. He raised cattle, milked cows, and raised turkeys and chickens over the years. He also drove truck for Panama Grain Elevator and Oppold Lumber. Gerry retired from farming in 2000. He also had a roofing business from 1962 to 1992, and a fencing business in a five county area until 2013. Gerry enjoyed dancing with his bride Betty, going to collectors shows, and displaying their collectables.  For 10 years he was Santa Claus for the town of Panama and made appearances at the local schools and homes. Gerry also was  editor for 12 years for the Ye Ole Fence Post newsletter and the Hawkeye Barbed Wire Collectors Association.

Gerry was preceded in death by his parents, twin brothers, Damian as an infant and Dal Huebert; two sisters, Verda Mae Huebert and Karen Risk and her husband Bob; grandson, David Christensen; and great granddaughter Kenadie Gessert. He is survived by his wife, Betty of Portsmouth; six children, Dan Huebert and his friend Rachelle Bradley of Persia, Iowa, Mike Huebert of Persia, Dennis Huebert and his wife Jeana of Denison, Iowa, Deb and her husband Dean Gessert of Harlan, Iowa, Diane and her husband Steve Mumm of Portsmouth, and Janice Christensen and her friend Gary Stolz of Earling, Iowa; 23 grandchildren; 27 great grandchildren; one great-great grandson; brother, Neil Huebert and his wife Cherylene of Panama, Iowa; sister-in-law, Sharon Huebert of Omaha, Nebraska and many other relatives and friends.

Memorials may be given to the Portsmouth American Legion Post # 547 or to the Shelby County Catholic Schools.

To order memorial trees or send flowers to the family in memory of Gerald Huebert, please visit our flower store.