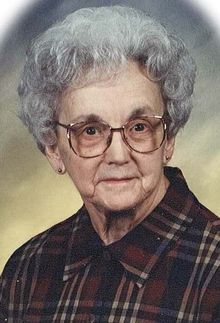 Hazel Louise (Lyman) Koski was born August 10, 1915, to Bert and Florence (Nichols) Lyman near Dunlap, Iowa. She was the third of six children. Hazel was raised on a farm south of Dunlap where she attended country school and then graduated from Woodbine Normal School in 1933. Her mother died when she was just 14 years old so she helped to raise her younger siblings and keep the house. She was also a teacher in the Crystal Rill one room country school for two years. Hazel married Lloyd Koski on January 30, 1937 at the Methodist Church's parsonage in Logan. The family lived on a farm six miles southeast of Dunlap until their retirement in 1977 when they moved to a newly built house in Dunlap. In March of 2013, Hazel moved to the Dunlap Assisted Living facility and in December she moved to the Rose Vista Nursing Home in Woodbine.

Hazel was a member of the Dunlap United Methodist Church and the United Methodist Women. She also served as the church treasurer for many years. Hazel was a 4-H leader and volunteered with the Harrison County American Cancer Society. Additionally, Hazel was an Avon Sales Representative for many years. Hazel was known for her rag rugs. She purchased her loom from an advertisement in the paper in the 1959. She has made over 8000 yards of rugs. Each of her children and grandchildren has several of her beautiful rugs. Hazel was also known for her caramel corn, fruit slush, skittles in the chicken feeder candy dish on her countertop, and always having cookies available whenever anyone stopped for a visit. She was an avid card player and she enjoyed rummikub as well. Hazel and Lloyd loved to dance and they spent many summers fishing in Lake Lida, Minnesota. This tradition continues on with their children, grandchildren and great grandchildren 35+ years after the couple started it.

Hazel was preceded in death by her parents; husband, Lloyd Koski on January 14, 1997; two infant great granddaughters; two brothers, Lloyd and Darrell Lyman; and two sisters, Della Petersen and Vera Ross. She is survived by her four children, Anita and her husband Phil Fouts of Woodbine, Iowa, Bonnie and her husband Dick Hawes of Spirit Lake, Iowa, Gene Koski and his wife Wendy of Lake Quivira, Kansas, Jane and her husband Dave Gardner of Woodbine, Iowa; 12 grandchildren; 28 great grandchildren; 10 great-great grandchildren; brother, Ray Lyman and his wife Burlette of Dunlap, Iowa; sister-in-law, Ruby Lyman of Independence, Missouri; and many other relatives and friends.

To order memorial trees or send flowers to the family in memory of Hazel Koski, please visit our flower store.