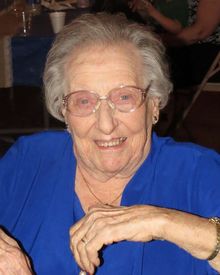 Helen Marie (Miller) Monahan was born March 4, 1920, to Frank and Mary (Jurgensmier) Miller in Harlan, Iowa. She was raised in Shelby County and attended country school. Helen helped out at home and then worked for area families. She met her future husband, John J. Monahan, at a dance. The couple married on September 22, 1942, at St. Mary's Catholic Church in Panama, Iowa. The couple farmed in Harrison County. In the mid 1950s they moved to the Stoll's farm. In 1968, they moved into Woodbine. Helen worked at Siebels Café and later on at Bob's Café. John died on August 8, 1985.

Helen was a member of Sacred Heart Catholic Church. Helen enjoyed baking ~ especially angel food cakes and apple pies with her sisters, making jelly, quilting, gardening, playing cards, and rocking all the babies. Each baby would be kept warm in one of Helen's embroidered quilts. At Christmas family members would look forward to her strawberry or raspberry jelly and apple butter.

Helen died on Wednesday, December 30, 2015, at the Rose Vista Nursing Home in Woodbine at the age of 95 years, nine months and 26 days.

To order memorial trees or send flowers to the family in memory of Helen Monahan, please visit our flower store.