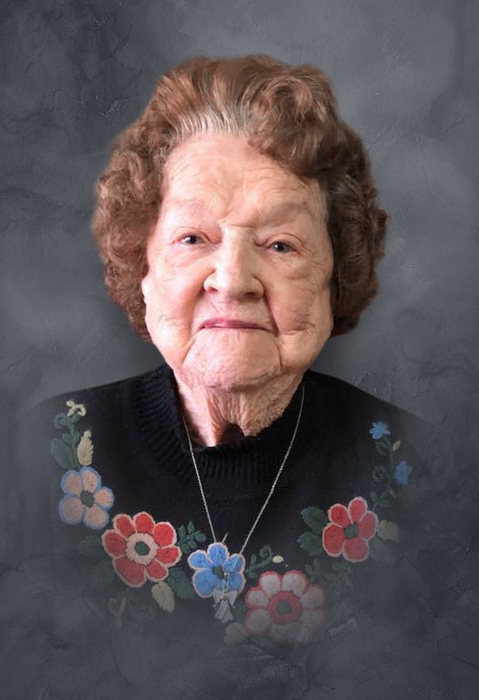 DUE TO FEDERAL AND STATE GUIDANCE ON GATHERINGS DUE TO THE COVID-19 PANDEMIC, MASKS ARE REQUIRED AT THE VISITATION AND FUNERAL SERVICE.

https://www.facebook.com/Fouts-Funeral-Home-Woodbine-161058843917646/?ref=br_rs  (please copy and paste the underlined link into your web browser or look up "Fouts Funeral Home Woodbine" in your Facebook search bar to find the live stream-

Ila Storm entered the world as Ila Mae Lathrop on January 31st, 1922, the daughter of Arthur and Lettie (Higley) Lathrop of Blencoe, Iowa. She began school in Blencoe before moving with the family to Turin, Iowa, where she attended school up until the 10th grade. Ila graduated high school from Onawa High in 1940. It was soon after graduating high school that Ila Mae married the love of her life, Vern “Stormy” Storm. Stormy had a habit of fondly referring to Ila Mae as “Tootsie”. The two were joined in holy matrimony on August 10th, 1940, in Pisgah, Iowa. Ila and Vern lived in and around the Pisgah area the remainder of their married life, the start of which was spent working together on “Grandpa and Grandma Johnson’s” farm in Pisgah. Later, Ila would begin her 53-year-long waitressing career at the Old Home Café in Pisgah for Dale Snodgrass, Pinky Poe, Elsie Wagner, and others. Ila was waitressing at the Old Home Café when the restaurant was at the height of its prime, including when the well-known commercial featuring singer-songwriter C.W. McCall and “Mavis” (Jean McBride Capps) was filmed on site. Ila Mae was a hard-working and beloved fixture of the Old Home Café up until her retirement at 83-years of age.

Ila was an active member of the Community of Christ Church (formerly the RLDS Church) in Pisgah, impressing the congregation with her lovely singing voice in weekly church services as well as in weddings and funerals over the years. Ila Mae was not only well-versed in gospel music—she was well-known for her yodeling skills as well. Her children, grandchildren, and great-grandchildren will always remember the way she could expertly switch between vocal registers at the drop of a hat. They will all also remember the way she loved to rock babes to sleep with a song on her lips. In addition to her active involvement with the Church, Ila was a member of Pisgah’s Red Hat Society and Outreach Committee and was a frequent volunteer at the Pisgah Department of Natural Resources. She also held the position of “Queen Esther” in the Order of the Eastern Star.

Ila Mae passed on from this world on October 6th of 2020 at the Rose Vista Nursing Home in Woodbine, Iowa. She lived a full life, having reached the age of 98 years, eight months, and six days at the time of her passing.

To order memorial trees or send flowers to the family in memory of Ila Mae Storm, please visit our flower store.