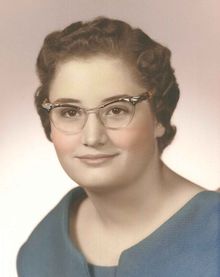 Mary Ilene Robinson Feige was born on June 11, 1943, in Logan, Iowa to Glenn and Gertrude (Shepard) Robinson. She attended Woodbine Community Schools and graduated in 1961. Her first job, while still in high school, was cleaning at the Heft Funeral Home. After graduation from Commercial Extension College, Omaha, Nebraska, Ilene held various secretarial and receptionist jobs in Omaha, including at a doctor's office and Kellogg's. Ilene married Alve Feige on November 23, 1963, at the First Christian Church in Woodbine. The couple lived and farmed north of Magnolia. Ilene worked at Clark Limestone in Logan until they started a family. She also contributed to her community by serving as Magnolia City Clerk. In February of 1980, after her girls were raised, Ilene went to work at the ASCS office in Logan. The family moved into Logan in 1983. Ilene assisted Harrison county farmers until she retired from FSA in January of 2013.

Ilene was a member of the First Christian Church Woodbine. Her life was centered around her family and especially her three grandsons. She considered herself fortunate to have the kids close and be involved in their school, church, and many sport activities.

Surrounded by family, Ilene passed Wednesday, November 15, 2017, at the Methodist Hospital in Omaha at the age of 74 years, five months and four days.

Ilene was preceded in death by her parents. She is survived by her husband, Alve Feige of Logan, Iowa; two daughters, Michele and her husband Gilbert Lovett and Deanna and her husband Steve Shiller all of Omaha, Nebraska; three grandsons, Brent Lovett, Spencer Shiller and Seth Shiller; two sisters, Donna Jean Robinson and Glenda and her husband Cary Donn all of Woodbine, IA; seven nieces and nephews she loved as her much as her own children and grandchildren; and many other relatives and friends.

To order memorial trees or send flowers to the family in memory of Ilene Feige, please visit our flower store.