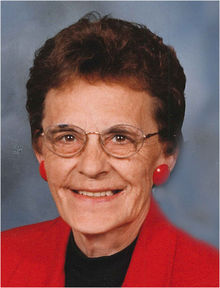 Janice Marie (Schaefer) Peterson was born September 16, 1939, to Alfonso and Irene (Weber) Schaefer in Dunlap, Iowa. She was raised in Dunlap and attended country school west of Dunlap. She graduated from Dunlap High School in 1957. Jan married her high school sweetheart, Jack Peterson, on September 19, 1957, in Council Bluffs, Iowa. The couple lived in Council Bluffs and Omaha. Jan worked at Mutual of Omaha. The couple also cared for foster children over the years. In 1978 the couple moved to South Sioux City, Nebraska. Jan was a teacher's aide at Bryan School in South Sioux City until her retirement in 1999.

Jan was a member of the St. Michael's Catholic Church in South Sioux City, Nebraska. Jan especially loved spending time with her grandchildren. She also enjoyed spending time at their cabin and going to the casino to play her favorite slot machine ~ the Wicked Winnings.

To order memorial trees or send flowers to the family in memory of Janice Peterson, please visit our flower store.