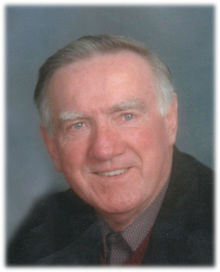 James LeRoy Hickey was born August 16, 1933, to Alice (Behm) and James P. Hickey in rural Woodbine, Iowa. He died February 1, 2014, at the Douglas County Health Center in Omaha, Nebraska at the age of 80 years, five months and 16 days. Jim grew up in Woodbine and attended both elementary and high school in the community. He graduated at the age of 16 and started his career at the Woodbine Twiner Newspaper. He was employed at the Twiner for 28 years. While employed at the newspaper he started a part-time career of photography. He also was the city clerk and a representative selling cemetery monuments. Jim married Marva Jo "Jodi" Smith on May 15, 1954. In his younger years Jim was an active member of the Holy Name Society of Sacred Heart Catholic Church. He and Pat Kelley were a long time duo and ushered for the annual Midnight Mass at Sacred Heart. Jim and Jodi lived in Woodbine the entirety of their marriage. They would have celebrated their 60th wedding anniversary on May 15, 2014. After Jim left the Twiner, he called on farmers for the Successful Farming Department of Meredith Corporation of Des Moines, Iowa.

Jim was a charter member of the Woodbine Rescue Squad for 28 years. He was a faithful follower and supporter of all of his children's activities. He was also a member of the Twiner Bowling Team in Dunlap. He and Jodi were members of different card clubs and 11 years of active membership in the Christmas caroling group named after him ~ Jimmy Lee Singers. Golf was his greatest hobby. He and Jodi lived in a duplex for six years at the Shadow Valley Golf Course.

To order memorial trees or send flowers to the family in memory of Jim Hickey, please visit our flower store.