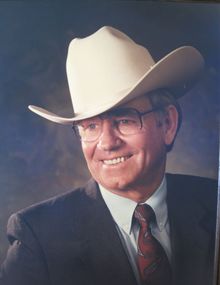 James Frank Schaben was born May 10, 1926, to Jacob and Blanche (Von Tersh) Schaben in Earling, Iowa. Jim's father passed away in 1934, and he was raised by his mother and aunt and uncle, Sue and Joe Hermrick. Jim graduated from St. Joseph High School in 1943. During WWII Jim entered the United States Marine Corp. After his honorable discharge he then attended the Reppert School of Auctioneering in Indiana. Jim married Ruth Schiltz on June 15, 1948. The couple was blessed with eight children. After starting in the bar business in Earling, Jim and Ruth purchased the Dunlap Livestock Auction in 1950. In 1974, they built the current facility.

Jim was a member of St. Patrick's Catholic Church and was a 4th degree in the Knights of Columbus. In 1966 Jim was elected to the Iowa Senate where he served until 1974. That same year Jim won the primary election to represent the Democratic Party in the Iowa race for governor. After that unsuccessful bid he retired from politics, but he remained dedicated to the issues that faced everyday Iowans. Jim loved the land and his opportunity to conserve it. In the 1970s Jim and Ruth donated 80 acres of land that is south of Dunlap to the Harrison County. This land is now called Schaben Park. Jim's farms have earned numerous conservation awards; a feat he was quite proud of. He also had great a love and respect for people and the many customers over the years that he was pleased to call friends. One of Jim's great joys in business was getting to work for four & five generational families in the livestock business. Additionally a passion he shared with Ruth was the horse racing industry. A great day for Jim was an auction on Tuesday and a mad dash to Omaha to catch the races at Aksarben. He also had a particular annoyance to his family driving too many vehicles to the same event.

To order memorial trees or send flowers to the family in memory of Jim Schaben, please visit our flower store.