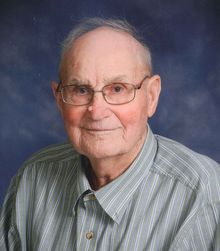 Joseph Henry Schraeder was born on April 3, 1921, to George and Anna Elfrieda (Kruse) Schraeder in Denison, Iowa. He and his family moved to Woodbine at the age of three. Joe graduated from the Woodbine Normal School. He then worked at various odd jobs for the local farmers and merchants such as: Seibel's Grocery Store, Russ Brandon's Grocery Store and the Woodbine Creamery. Joe proudly served his country in the United States Army from 1942 ~ 1946. He served in the Search Light Battalion and was then in the military police while stationed in the Philippine Islands and also in Japan. He was honorably discharged on February 16, 1946. Joe married Eileen Herman on April 3, 1946, at Zion Lutheran Church in Magnolia. The couple farmed north of Magnolia for 48 years. He also helped his brother, Bob, at Schraeder Electric. In December of 1992, the couple moved to the Woodland Apartments in Woodbine. In 2009, he became a resident of the Rose Vista Assisted Living and then the nursing home.

Joe was preceded in death by his parents; wife, Eileen Schraeder on September 8, 2010; sister, Louise Beaman; half sister, Dorothy Schraeder; and five half brothers, Pat, Ed, Herbert, William and Arnold Schraeder. He is survived by his daughter, Jane Schraeder of Omaha, Nebraska; son, John Schraeder and his wife Kim of Ostrander, Minnesota; two grandchildren, Brittany and her husband Jeremy Mihm of Saratoga, Iowa and Eric Schraeder and Tiffany Lewison of Lime Springs, Iowa; brother, Robert "Bob" Schraeder and his wife Lois of Woodbine, Iowa; and many other relatives and friends.

To order memorial trees or send flowers to the family in memory of Joe Schraeder, please visit our flower store.