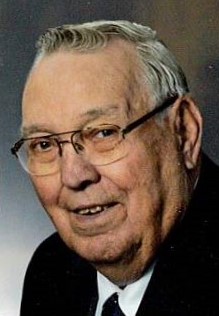 WE WILL BE LIVE-STREAMING THE SERVICE ON OUR FOUTS FUNERAL HOME FACEBOOK PAGE.

https://www.facebook.com/Fouts-Funeral-Home-105026182897108/ (please copy and paste the underlined link into your web browser or look up "Fouts Funeral Home" in your Facebook search bar to find the live stream- this will start at 10:00  a.m. Thursday, May 14th)

THE VISITATION IS AN OPEN VISITATION AND WE WILL LIMIT THE NUMBER OF PEOPLE IN THE FUNERAL HOME TO NO MORE THAN 10 AT ONE TIME.

THE FAMILY HAS ASKED THAT ANYONE WHO WISHES TO ATTEND THE VISITATION TO PLEASE WEAR A MASK. THE FAMILY WILL PRESENT INTERMITTENTLY

John Leroy Assmann, the son of Carl and Edith (Rosman) Assmann, was born near Earling, Iowa, on November 3, 1932. John was baptized, received his first communion and was confirmed at St. Patrick’s Church in Dunlap, Iowa. He attended St. Joseph’s Catholic School graduating in 1951. John spent two years in the Armed Forces which included 18 months in Germany during the Korean War. He received an Honorable Discharge in 1955. John then came home and started farming on the family farm. On May 20, 1957, John was united in marriage to Georgean Graeve at St. Joseph’s Catholic Church in Earling. One son and two daughters were born to this union. After their marriage, Mr. and Mrs. Assmann farmed corn, beans, cattle and hogs. John loved his livestock. In 1972, the Assmann’s received the Iowa Master Pork Producers Award and in 1991 their farm received the Century Farm Award.

John was a lifelong member of St. Patrick Catholic Church and served on the church council. He was President of the Dunlap Farmer Co-op board, Shelby County Pork Producers, was a member and President of the Remote-Control Flyers Club and belonged to the Dunlap American Legion. John was a man of many talents. He designed and built his hog buildings which were featured in Successful Farmer magazine. He built steel trailers, did wood working and could fix anything. He was great with numbers. John was a hard-working man. He instilled a strong work ethic and a sense of honesty and responsibility in his children and grandchildren. The family took many family vacations to Disney World in Florida and trips to Branson. John and Jean enjoyed traveling to Europe for their 50th Anniversary. They visited South America, Alaska, Hawaii, took many cruises and visited over 20 islands. They also took 25 bus trips with friends, which John really enjoyed. He enjoyed card playing, dancing the polka and going to casinos. Most of all, John cherished his family. He loved going to his grandchildren’s events and was a loving, dedicated husband, father, grandfather, brother, uncle and friend.

John was preceded in death by his parents; brothers, Jim, Francis and Albert; sisters, Donna Lenz, Betty Klein and Linda Nielsen. He is survived by his wife Georgean of Earling; children, Connie and husband Bob Owens, Allan Assmann and Sheryl and husband Frank Kilton all of Omaha; six grandchildren; a great-grandchild on the way; sisters-in-law, Doris Assmann of LaPalma, California, and Eunice Assmann of Carroll, Iowa; brother-in-law, Al Nielsen and his wife Helen of Johnston, Iowa; and many other relatives and friends.

To order memorial trees or send flowers to the family in memory of John Assmann, please visit our flower store.