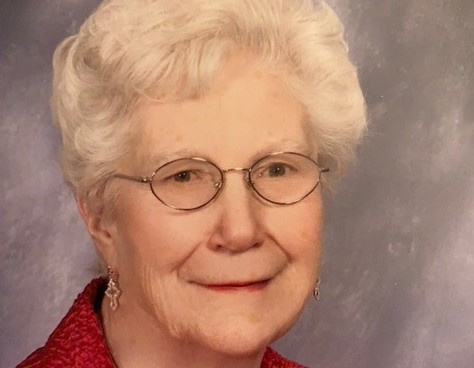 DUE TO FEDERAL AND STATE GUIDANCE ON GATHERINGS DUE TO THE COVID-19 PANDEMIC, MASKS ARE REQUIRED AT THE MEMORIAL SERVICE. THE SERVICE WILL BE LIVE STREAMED ON THE FOUTS FUNERAL HOME WOODBINE FACEBOOK PAGE STARTING AT 2:00 P.M.

Joyce (McGee) Winther was born on February 12, 1932, in Woodbine, Iowa to Fred and Freda (Johansen) McGee. She attended country school and then Woodbine High School. On February 8, 1950, Joyce married Jim Winther. The couple was blessed with four children; Craig, Scott, Amy and Bruce. They lived and farmed on Jim’s birthplace home until they moved to town on April 27, 2002.  Joyce worked at Westmont Care Center for 25+ years. Jim died June 4, 2004. Joyce became a resident of Rose Vista Nursing Home in the fall of 2016.

Joyce was a member of the Woodbine United Methodist Church. She enjoyed baking, farm chores, vacationing and she loved to help others. Joyce was known for her homemade pies.

To order memorial trees or send flowers to the family in memory of Joyce Winther, please visit our flower store.