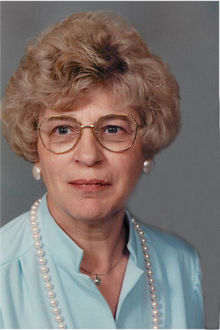 Katherine Edith (Coyle) Stevens was born January 29, 1934, to Edward and Nellie (Ehlert) Coyle in Woodbine, Iowa. She attended country school near Little Sioux and enjoyed cheer-leading in high school. She graduated from Mondamin High School. She then moved to Omaha and worked for Bell Telephone and Mutual of Omaha Insurance. After returning to the Woodbine area, Katherine married Loyd "Tip" Stevens. Katherine then worked at banks in Woodbine and Mondamin as well as the site manager at the Woodbine Senior Center until her retirement.

Katherine was an active member of Immanuel Lutheran Church in Logan. She followed and supported her husband and boys to many baseball games throughout the years. She loved to entertain and had many fish fries with family and friends. Katherine always enjoyed a glass of wine, which was made by her husband. After retirement, along with her family, she spent many days at their summer home at Ryan's Landing on the Missouri River. Katherine especially enjoyed the time spent with her three high school girlfriends, "The Golden Girls." Since 1952, they have celebrated twice yearly with a slumber party.

To order memorial trees or send flowers to the family in memory of Katherine Stevens, please visit our flower store.