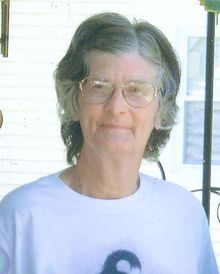 Kathleen Ellen (Petersen) hare was born on July 7, 1931, to Roy and Lolita (Ambrose) Petersen near Woodbine, Iowa. Kathleen attended country school and graduated from Woodbine High School in 1949. She then attended Morningside College in Sioux City, Iowa. Kathleen taught in Onawa, Iowa for two years. Kathleen married Wallace Hare on November 29, 1953, at the First United Methodist Church in Woodbine. The couple lived on the Hare family farm west of Woodbine until moving to the farm in the Magnolia Township where they spent 45 years. Kathleen later received her Bachelor's degree in Education from Dana College. Kathleen taught upper elementary school at the Woodbine Public School for 31 years. The couple moved into Woodbine in 2005.

Kathleen was a member of the First United Methodist Church in Woodbine, the Neighborhood Club, and the Retired Teachers Group in Harrison County. She enjoyed visiting with her former students. Wallace and Kathleen enjoyed their trip to Washington DC with other teachers.

Kathleen was preceded in death by her parents and her husband, Wallace on June 9, 2011. She is survived by her two children, Frederick Wallace Hare and his wife Karen of Rock Island, Illinois and Rebecca Ellen Hare of Shelby, Iowa; four grandchildren; nine great grandchildren; brother, Karl Petersen and his wife Jackie of Logan, Iowa; friend, Sandy Lary of Logan, Iowa; and many other relatives and friends.

To order memorial trees or send flowers to the family in memory of Kathleen Hare, please visit our flower store.