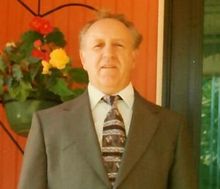 LaVerne Hunt was born on January 4, 1939, to Ora and Margaret (Vanderpool) Hunt in Woodbine Iowa. LaVerne attended school and graduated from Woodbine High School with the class of 1957. He started working at Campbell Soup in Omaha. On June 21, 1959, LaVerne married Myrna Alvis at the RLDS Church in Woodbine. The couple lived in Omaha all of their married life. LaVerne proudly served in the Nebraska Air National Guard for nine years. He also worked at Sears for a number of years; first in sales and then in the automotive center, and he operated a couple of gas stations in Omaha. Additionally LaVerne operated the concrete saw on a road construction crew. He then became a truck driver. He started out as an over the road driver and then became a regional driver. LaVerne retired from truck driving in December of 2008.

LaVerne loved cars, was a member of the Chevy Classic Club, followed the NHRA, did a lot of mechanical work, and liked to follow UNO basketball and Green Bay Packers. He liked to watch Westerns (especially John Wayne), the Rose Bowl Parade and the Munsters. The couple enjoyed going to the College World Series for many years. LaVerne made great pancakes ~ including green pancakes.

LaVerne died on Friday, February 9, 2018, at the Josie Harper Hospice House in Omaha, Nebraska at the age of 79 years, one month and five days.

LaVerne was preceded in death by his parents. He is survived by his wife, Myrna Hunt; daughter, Marti and her husband Scott Stracke; and granddaughter, Kortni Stracke all of Omaha, Nebraska; sister, Zelma and her husband John Tolliver of Surprise, Arizona; and many other relatives and friends.

To order memorial trees or send flowers to the family in memory of LaVerne Hunt, please visit our flower store.