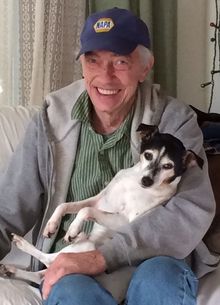 LaVerne Ray Kerger was born April 30, 1947, to Henry and Myrtle (Shepard) Kerger near Pisgah, Iowa. He was raised near Woodbine and attended country school and Woodbine High School. LaVerne proudly served his country in the U.S. Navy during the Vietnam War. LaVerne married Irma Tharp on September 14, 1968, in South Carolina. After his honorable discharge the couple stayed in South Carolina for a short time and then returned to Woodbine. LaVerne did carpentry work with his brother, Charlie, and also worked at Sayers Volkswagen in Council Bluffs. He then opened up the Match It Auto Body Shop in Woodbine.

LaVerne loved anything that involved cars such as: working on cars, going to car shows, helping with the Applefest Car Show, and fixing derby and race cars.

LaVerne died on Saturday, August 8, 2015, at his home in Woodbine at the age of 68 years, three months, and nine days.

To order memorial trees or send flowers to the family in memory of LaVerne Kerger, please visit our flower store.