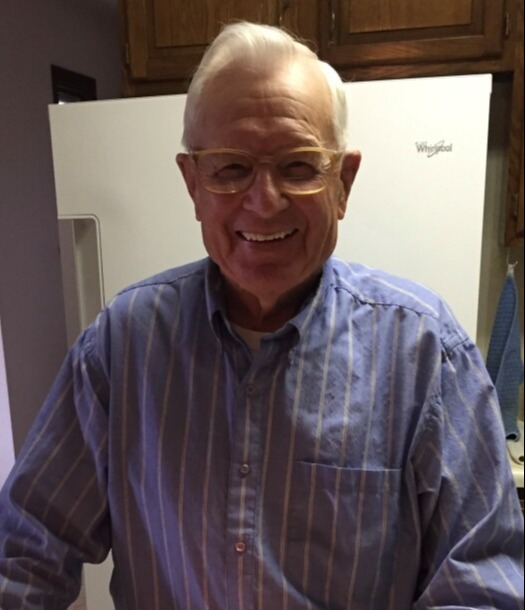 Lawrence Buryl Shaffer was born in Moorhead, Iowa on “Moving Day” March 1, 1924 to Burl and Anna (McHugh) Shaffer.  In his youth, he spent time in Magnolia, Pisgah, Beebeetown, Logan, Persia and Woodbine.  Lawrence grew up attending many one-room country schoolhouses and working on the farm.  He left home at an early age to work as a hired man for Jack Martins, then Bill Stamp.  In the spring of 1944, Lawrence was inducted into the US Navy and took basic training in Farragut, Idaho.  Lawrence was then assigned to the radar crew of the USS Darke (APA 159), a Haskell class attack transport ship during World War II.  The ship spent war time in the Philippines, Okinawa, Iwo Jima, and was   present in the occupation of Japan.  At the time of his discharge from the Navy, Lawrence had reached the rank of third-class petty officer.  After helping decommission the ship after WW II, he    returned to Iowa and was united in marriage to Myrna Marie Smith on October 31, 1946, at the First Christian Church in Woodbine, Iowa.  Lawrence and Myrna began a farming career in the Magnolia area until finally settling around Woodbine.  Three children were born to them: Gloria Marie, Steven Lawrence and Craig William.  In 1984, Lawrence and Myrna retired from farming and moved into Woodbine.

Lawrence was a member of the First Christian Church in   Woodbine where he was very active. He kept himself active by mowing lawns, painting houses, trimming trees, and basically being anyone’s handy-man as needed. Lawrence loved to tell farming stories as well as share his WW II Navy experiences.  He played a mean game of ten-point pitch and dominoes.

Lawrence passed away on Wednesday, December 22, 2021 at the Rose Vista Nursing Home at the age of 97 years, nine months and 21 days.

Lawrence was preceded in death by his parents, wife, Myrna; infant sister, Arlene; brother, Leo killed in Italy during WW II; sister, Doris Fetter; granddaughter, Gwyn Marie DeLance; as well as several brothers and sisters-in-law.  Those family members remaining to honor his memory include three children, Gloria and her husband Dick Allen of Woodbine, Steven Shaffer and his wife Janelle of Woodbine and Craig Shaffer and his wife Diana of Aurora, Nebraska; seven grandchildren; 21 great-grandchildren; sister, Nadine Wood of Houston, Texas; along with many other friends and family.

To order memorial trees or send flowers to the family in memory of Lawrence Shaffer, please visit our flower store.