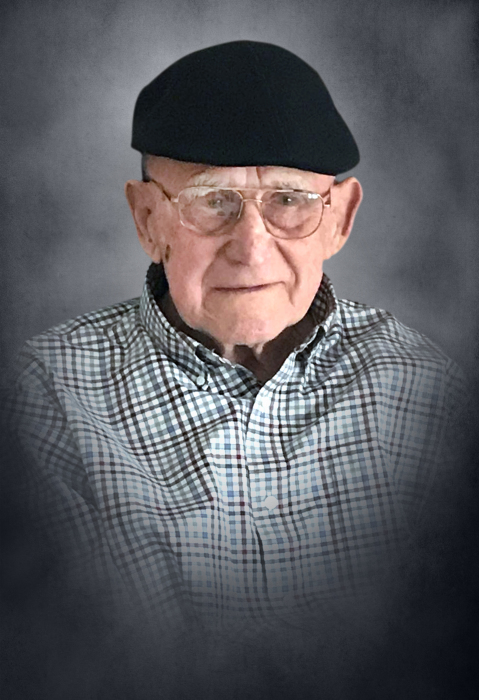 Leo Peter Kenkel was born on December 28, 1922, to Bernard and Caroline (Mumm) Kenkel on a farm near Dunlap, Iowa. Leo attended St. Joseph’s School in Dunlap. The family moved to Woodbine his senior year, so Leo stayed in Dunlap with the Shields family and helped on their farm. He graduated from St. Joseph’s High School in 1941. After high school, he worked on various farms. He enlisted in the U.S. Navy in 1945 and served his country. After his honorable discharge, he worked on a travelling harvest crew. Leo then worked as a teller at the bank in Panama, Iowa, and it was there, he met the love of his life. Leo and Monica Schwery were united in marriage on May 11, 1954, at St. Mary’s of the Assumption Church in Panama. The couple lived and farmed outside of Panama for five years. In 1959, they moved to a farm near Woodbine and raised five children. In 1963, they moved to town and Leo started full-time at First National Bank of Woodbine. He started as a teller and retired as Vice President in 1982.

Leo was a member of Sacred Heart Catholic Church where he sang in the choir and served as President of the Parish Council. He was President of the Community Club during Woodbine’s Centennial celebration. Leo was a member of Kiwanis and the Woodbine American Legion Post # 143. He was a longtime pitcher on the Westside Farmers slow-pitch softball team.

In lieu of flowers, the family has requested that memorials be directed to:

To order memorial trees or send flowers to the family in memory of Leo Kenkel, please visit our flower store.