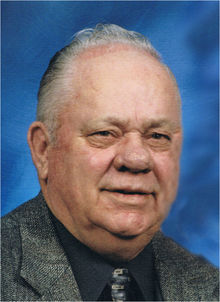 LeRoy Dean Stevens was born April 28, 1930, to Harry and Mabel (Katzenberger) Stevens near Woodbine, Iowa. He grew up in the Woodbine and Moorhead areas and attended country school. He started farming with his parents, and he later obtained his GED. LeRoy proudly served his country in the U.S. Army from 1948-1951. After his honorable discharge LeRoy married Virginia Renz on May 2, 1954. Virginia affectionately called LeRoy "Steve". The couple made their home in Dunlap and then moved between Woodbine and Logan where LeRoy worked for Johnny Plath. They moved to Scribner, Nebraska where he worked at Hogenmeyer Hybrids, and then moved to Dunlap where LeRoy worked at IBP in Denison. In 1966 they moved to Soldier and LeRoy started working for Monona County. He was on the bridge crew and then was a maintainer operator. He retired in 1992.

LeRoy was a member of Soldier Lutheran Church. He enjoyed working on small engines. LeRoy's grandkids and great grandkids were his pride and joy.

LeRoy was preceded in death by his parents; his wife, Virginia Stevens on April 4, 2009; and brother, Cecil Stevens. He is survived by his son, Maynard Stevens and his wife Marilyn of Lawrence, Kansas; daughter, Cathy and her husband Joel Shanahan of Ute, Iowa; seven grand-children; six great grandchildren; two brothers, Robert Stevens and his wife Patti of Stanton, Iowa and Harold Stevens and his wife Rosemary of Branson, Missouri; and many other relatives and friends.

To order memorial trees or send flowers to the family in memory of LeRoy Stevens, please visit our flower store.