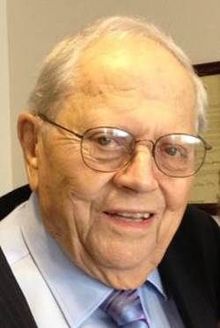 Max, the third of four boys, was born and raised on farms near Woodbine, IA. Farming until his younger brother was ready to graduate high school in 1944, he enlisted in the US Army and married (Roberta) Fern Henderson, also of Woodbine. Assigned to the 78th Infantry Division, he entered combat in western Germany as a replacement in the Battle of the Bulge. Serving as a scout, he earned his Combat Infantry Badge, a Purple Heart with Oak Leaf Cluster, a Bronze Star Medal and European African Middle Eastern Theater Ribbon w/3 Bronze Battle Stars, fighting in the Hurtgen Forest, the Roer Valley, and east of the Rhine River, having crossed the renowned bridge at Remagen. In 1951 he was called back up for the Korean War and served stateside in a Heavy Equipment Shop.

In 1946, Max began a 24 year career with Tractor Supply Company, serving as a Vice President and a member of the Board of Directors until the company was sold in 1970. Having been instrumental in Lloyd and Orville Race's purchase of their Tractor Supply franchises, he and a partner purchased Race Bros Farm Supply in Springfield from them in 1971. Max became sole owner and helped finance three other farm stores. He sold his interest in two of them, his sons became his partners in Carthage, MO, and with his involvement his three children opened a third store in Monett, MO.

Max served as President of Wheatbelt, a distributor to independent farm stores, and on the Ozark Empire Fair Board. He was a Rotarian, was active in his church and community, and enjoyed participating in Congressman Roy Blunt's tours of SW Missouri that sought to recognize and promote innovative and successful enterprises in the area. He and his wife Fern participated in the establishment of Founder's Park in Springfield, contribute to the Marching Band and Music Department of (Southwest) Missouri State University and sought to give back to the community in various ways. On March 6, 2012, he was awarded the Outstanding Missourian Award at the State Capitol, presented by Rep Charlie Denison.

Max will be remembered for his deep love and devotion not only for his wife and family, but also for the countless number of friends whom he greatly valued, his generosity, kindness, integrity, hard work and positive attitude. He affected the lives of many.

The family is most appreciative for the outstanding, loving care he received at The Manor at Elfindale.

To order memorial trees or send flowers to the family in memory of Max DeForest, please visit our flower store.