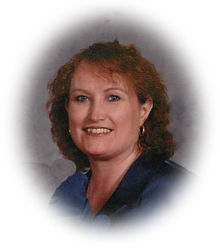 Melanie Jane Handke was born on December 15, 1957, at Crawford County Hospital in Denison, Iowa to Ed and Ila (Siglin) Handke. Melanie was baptized and confirmed at the St. John's Lutheran Church in Dunlap, Iowa. Melanie graduated from Dunlap High School in 1976 and married Dan Vandemark on October 15, 1976. The couple was blessed with three children; Scott, Laurie, and Danielle.

Melanie moved to South Sioux City, Nebraska where she worked for the Gateway 2000 Computer Company. During this time, Melanie started developing health issues. She moved to Omaha to work for Mutual of Omaha Company feeling she could get better medical care. However, Melanie's health continued to deteriorate and she was soon put on permanent disability. She continued to struggle with increasing health problems for the next 15 years until she finally lost the battle.

Melanie passed away on Wednesday, September 2, 2015, at the Josie Harper Residence Hospice House in Omaha, Nebraska at the age of 57 years, eight months, and 18 days.

Melanie will be forever in our hearts.

To order memorial trees or send flowers to the family in memory of Melanie Handke, please visit our flower store.