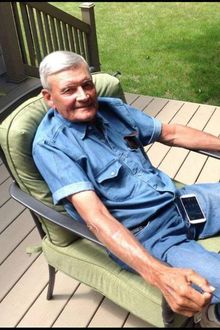 Melvin Amos Ronk was born on June 23, 1943, to Murlyn and Lillian (Probasco) Ronk east of Woodbine, Iowa and raised near Woodbine. Melvin attended Crystal Rill Country School and graduated from Woodbine High School in 1961. Melvin worked at the Armour Packing Plant in Council Bluffs for a while. He worked at Tom Barry's Standard Gas Station in Woodbine and managed a gas station in Logan for a short time. Melvin married Judy Cary on October 19, 1963, at the Griswold United Methodist Church. The couple lived in Woodbine and then moved to a farm east of Woodbine when he began farming with his folks. They moved to their current farm in 1972. Melvin obtained his insurance and real estate license in the 70's and he worked at the Ronk Koski Insurance Agency and Real Estate. Melvin eventually purchased a semi to haul his grain. He partially retired in 2012.

Melvin was a member of United Methodist Church in Dunlap. He enjoyed farming, family, and most of all laughing. Melvin liked to pick on people and make them laugh. Melvin and Judy began wintering in Florida in 2012.

Melvin died Sunday, April 9, 2017, at the Creighton Medical Center in Omaha, Nebraska at the age of 73 years, nine months and 17 days.

To order memorial trees or send flowers to the family in memory of Melvin Ronk, please visit our flower store.