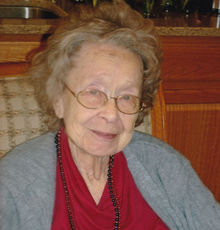 Nola Virginia Musgrave went home to be with her Savior on September 11, 2015. She was born, Nola Virginia Adams on July 30, 1922, to Linwood and Ethel Adams on their farm in Woodbine, Iowa. Both of her parents, her three sisters, Lucy Massie, Edna Bishop, Anna Clausen and her husband John Musgrave preceded her in death. Nola married John Melvern Musgrave at First Christian Church in Council Bluffs, Iowa on January 28, 1946. They celebrated over 50 years of marriage and raised two sons. She was a devoted wife and mother who loved her family, her church and her many friends. She especially enjoyed having her family gatherings at her home in Missouri Valley, Iowa with extended family and grandchildren, and loved to cook for them.

Nola and John also enjoyed traveling with their trailer every winter to many different locations all over the United States. She was an active member of the Missouri Valley Christian Church for over 30 years, where she taught Sunday school there to many lucky teenagers and preteens. After her husband John's death in 1996 Nola moved to Monument, CO in 1999 to be closer to her sons, Todd and Benn and her nine grandchildren. She continued to devote her life to her family and her new church at Little Log Church in Palmer Lake, Colorado.

To order memorial trees or send flowers to the family in memory of Nola Musgrave, please visit our flower store.